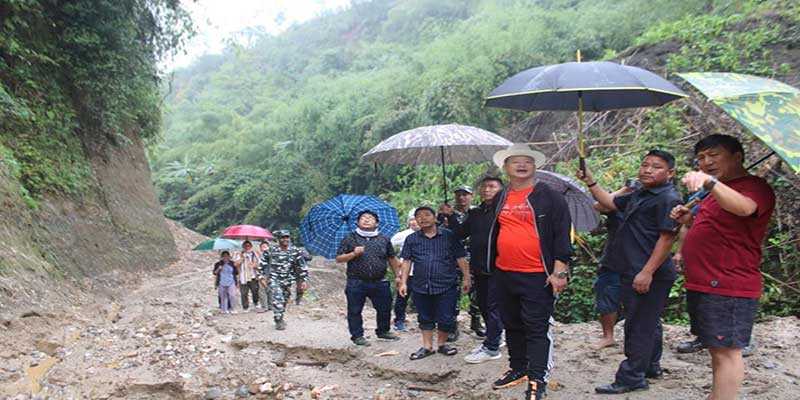 ITANAGAR- Itanagar Municipal Corporation (IMC) Mayor, Tame Phassang along with Corportaros and IMC officials inspected the ongoing construction of the solid waste management plant on Saturday to review the progress of work at Karsingsa.

During the inspection, the mayor ordered the engineers to complete the work on time. “The company is ready to install the SWM plant once construction of the access road is complete,” the mayor said.

He further added that “one of the main challenges of IMC is to dispose of garbage, until there is no proper solid waste management plant, our efforts to make own city will be incomplete”.

Phassang further informed that once completed, the SWMP will cover Naharlagun, Nirjuli and Banderdewa areas including some of the adjacent areas.

Earlier, the mayor also inaugurated CC Pavement road in Niya settlement under the administration of Banderdewa this morning. During the program, residents informed the mayor for the construction of access and drainage roads in the settlements.

While responding to the representation of the natives, the mayor advised the gathering to submit their grievances to the local corporal and assured them to deal with their grievances accordingly.

Assistant Secretary-General for Humanitarian Affairs and Deputy Emergency Relief Coordinator, Joyce Msuya, Opening of the PSEAH event “Fit for Protection from Sexual Exploitation and Abuse and Sexual Harassment?”, 11 May 2022 – Global