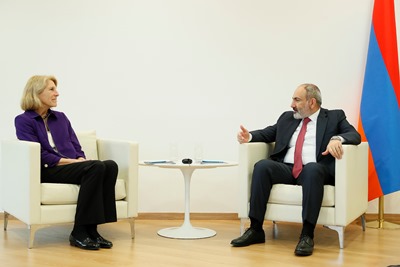 Pashinyan stressed the importance of the ongoing development and expansion of US-Armenian relations. He also commended the United States for helping the Armenian government effectively advance democratic reforms, adding that the development of democracy is a top priority for the executive branch.

In turn, Donfrid said that the US administration also attaches great importance to expanding and strengthening cooperation with Armenia in various directions, therefore, support for the development of democratic institutions in Armenia will be keep on going.

The interlocutors also discussed the developments in the South Caucasus region, the settlement of the Karabakh conflict, the activities of the demarcation and security commission of the border between Armenia and Azerbaijan.

The Armenian Prime Minister stressed the importance of strengthening peace and stability in the region and stressed the need for a proportionate response from the international community to provocative statements and actions that undermine regional stability. At the same time, he mentioned the key role of the United States as the co-chairman country of the OSCE Minsk Group and stressed the importance of a comprehensive settlement of the Karabakh conflict within the framework of the co-chairmanship of the Minsk group.